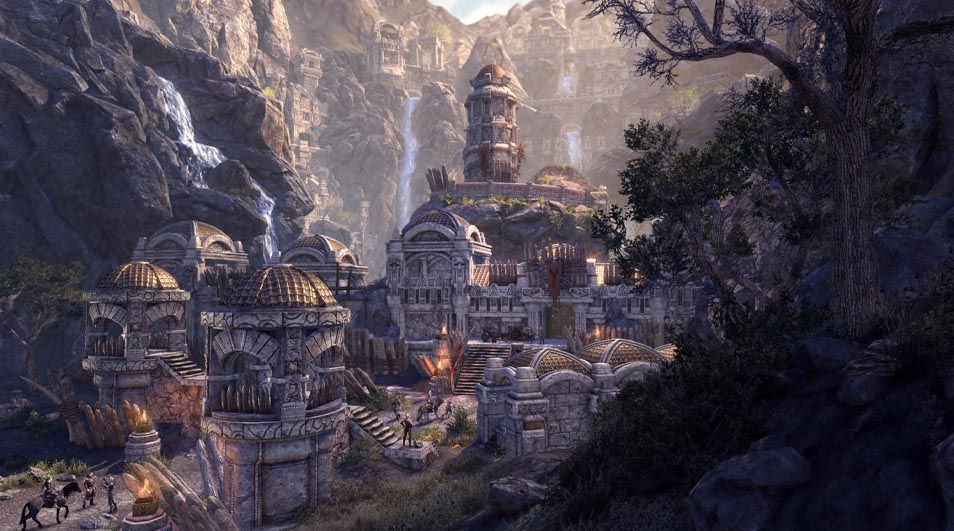 We have the usual bevy of things that we have come to expect from ESO’s 3rd quarter Markarth DLC, and then we’ve got the secret sauce. That something extra that no one saw coming, and it’s absolutely amazing. First, let’s touch on the more expected items.

Along with adding the new zone of The Reach, ZOS is also adding the town of Markarth! You may remember waking up in this town if you found yourself drunk in Skyrim after drinking with a stranger in a bar, and waking up on the other side of the map!

We will see the addition of two new homes! Stone Eagle Airy and Shalidor’s Shrouded Realm!

Test yourself in a new solo arena, Vateshran Hollows! This arena is “designed to test your strength, wits, and resolve with challenging bosses, multiple unlockable paths, and powerful, hidden secrets that can help you claim the honored title of Spiritblood Champion.”

Rewards for completing this arena will include gear, achievements, a new dye described as “the blackest black in the game” and more!

ZOS will be adding new Mythic items such as the Ring of the Pale order that Restores 15% of the damage you deal as health. Sounds perfect for the new solo arena!

ZOS is listening & added these Quality of Life features

ZOS has added the Item Set Collections system, it will be an account-wide system that allows you to forever have access to any item once that item has been bound to you. No longer will you need to horde sets just in case you want to use them in the future, now you will be able to craft any bound item once you have found it!

Automatic writ crafting has been built into the game. Provided you have the materials and the ability to do so, the game will now bring up the item you are trying to craft. This will work very similarly to the Lazy Writ Crafting addon that PC players have come to rely so heavily on!

The transmute crystal cap has been increased! Crack open those geodes that have been sitting in your inventory!

Advanced Filtering and Search in your Inventory

They have added sub-tabs to your inventory so that you can filter your gear by weapons, armor, consumables, and so on! They have also added a search bar so that you can simply search for the item you looking for! No more scrolling through 200 items!

Group Battlegrounds are BACK

Group battlegrounds are returning to Elder Scrolls Online. There will now be two que options for battlegrounds. Solo and Group ques. Solo ques will be in separate matches from the group ques. The two will not mix!

To avoid fragmenting the playerbase, the ability to choose specific battleground modes has been removed.